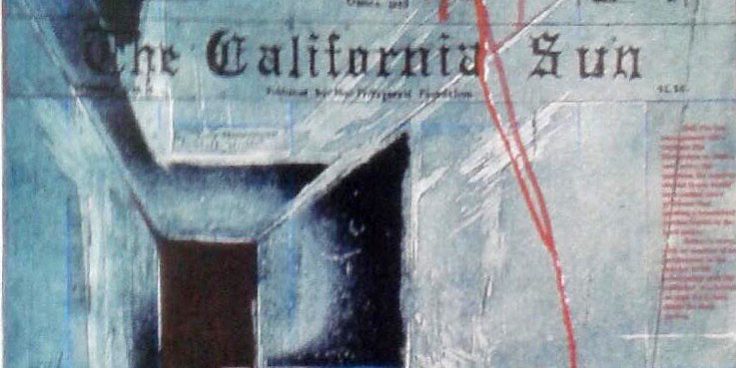 “BLACK AND WHITE AND RED ALL OVER” at Crepe Bistro

Christine Iriarte Niswonger, award winning Basque artist and former college art professor, believes that artists have an obligation to address issues of social consequence and their work must have moral conscience.

Her latest show, “Black and White and Red all over,” concerns the greed, ego, relevance, power and irony of the contemporary newspaper business.

“As a newspaper reporter and editor I experienced firsthand the tremendous power of words, “Niswonger said. “The media has free access to those powerful words. It is an industry virtually unregulated because of constitutional rights and with tremendous potential for abuse of that power.”

The series will be on display at Crepe Bistro, 420 S. Rampart #150,Vivoli Village, Summerlin, from June 23 through July 7, and includes full color etchings of newspaper images, headlines, typographic details and internal memos, all combined in interesting combinations.

According to Niswonger the work is designed to communicate a message which is both familiar and revealing of some very different truths about the newspaper industry.

“I cannot speak of all abuses in the newspaper industry. But I can speak of the specific abuses that I experienced.” Niswonger explained.

“It is through those experiences that I hope certain questions will be asked by the viewer about their own power which they trust so completely to the media.

According to the artist one experience involved a local college professor who was having students over for weekend parties. Those parties allegedly involved drugs and sex.

“ We in the newsroom were instructed to ‘get the guy’ and dig up anything we could find on his life and background,” the artist said. “ We ran stories daily, interviews with his colleagues, his neighbors, his old school teachers, until, after about three weeks, we came into work to find he had shot and killed himself. And we had driven him to that by our aggressive attempts to create sensational page-one stories.”

“If news stories could be suppressed, altered, manipulated and completely censored in my personal experience, it is possible the same abuses and worse happen on a larger scale.”

According to Niswonger, this series of work addresses moral and cultural issues, including business ethics and the dumbing-down of America’s newspapers.

The artist contends that when she worked her first newspaper job, the press was still on a Watergate high and everyone wanted to be an investigative reporter, exposing corruption and righting wrongs.

“It was a respectable profession,” she said. “But years later, circulation figures plummeted and once healthy newspapers folded. In an effort to win back readers, newspapers ‘redesigned’ the product and devised ‘focus groups’ to study reader preferences.

According to Niswonger that resulted in news becoming passé, while readership numbers ruled.

“As staffers we were told to take a story as close to the edge of libel as possible without going over. Why were we pushed to ‘create’ sensational stories, controversy, scandal where none existed, and at the same time suppressing stories which were detrimental to the news organization itself? Money. Newspapers are corporations and have a product to sell; advertising.”

The artist will be available to discuss her work at Crepe Bistro on June 24 and July 1, at 5 p.m.

Niswonger is a member of City Lights Artists’ Co-op.

Art Classes in watercolor, acrylic, abstract water media and oil are currently being offered! Aspiring artists or those simply looking to refresh their skills are welcome.

Established in 2003, City Lights Artists’ Co-op is now a non-profit 501(c) 3 entity. We fund scholarships and mini-grants awarded to local students with aspirations in the world of art. Tax-deductible donations are accepted.

Ginna Han’s ‘Together Into The New’ Exhibit at City Lights Art Gallery
October 22, 2020

Tommy Tucker’s ‘Child of the Past’ Exhibit at City Lights
January 27, 2020